The bond will be paid off over 30 years, and would maintain the City of Salem bonded tax rates at the current levels.

How Projects Were Selected

Project ideas came from community outreach through Neighborhood Associations, City boards and commissions, other organizations, and City residents. Some ideas came from public testimony during the Bond Steering Committee meetings, others from earlier community outreach in planning park areas or planning of travel corridors for bicycles or vehicles. In building the proposal, the Bond Steering Committee members considered equity and climate.

The projects do not address all the streets and parks in Salem. The voter approved uses for this bond measure are:

Bond funds would be used for roadway projects, and include curb ramps consistent with the ADA at the following locations:

Bond funds would be used to upgrade existing streets to urban street standard and include new curbs, sidewalks, multi-use path or bike lanes, stormwater treatment, and streetlights with pedestrian crossings at the following locations:

Strengthen existing bridge to remove load restrictions to allow for safe crossing at:

Purchased with bond funds in 2006, Salem's fire engines are 15 years old and have reached 450,000 "motor miles". This is at or past the expected life of the equipment according to the manufacturer and industry standards. The equipment has been maintained, but there has been an increase in the frequency and cost of repairs. The fire engines, ladder trucks, and other equipment such as various types of saws or breathing equipment would be replaced, if the proposed measure passes.

The bond would fund:

Bond funds would be used to purchase property for and construct up to two new fire stations. The City may explore whether it would repurpose existing property or otherwise relocate a station.

Bond funds would be used to acquire two properties for branch libraries on those same sites as future affordable housing.

Installation of Upgrades at Sport Fields

Bond funds will provide funding to public and private developers for the construction of multi-family housing that would be accessible to lower-income individuals or families.

Programs typically target rents at the 80% Average Median Income level for the county.

City services to residents and businesses are delivered using technology. Bond funds would be used to replace outdated financial and accounting systems, create a second data center for recovery after a disaster, and install a redundant fiber ring which would provide resiliency if primary systems were to become nonoperational.

The Civic Center was built 50 years ago. To meet current earthquake standards bond funding will be used to reinforce all three buildings which would allow visitors and staff exit options in the event of an earthquake. Funds would be used to replace and support skylights, windows, roofs and other systems, with abatement of hazardous materials and restoration of areas impacted by structural work. 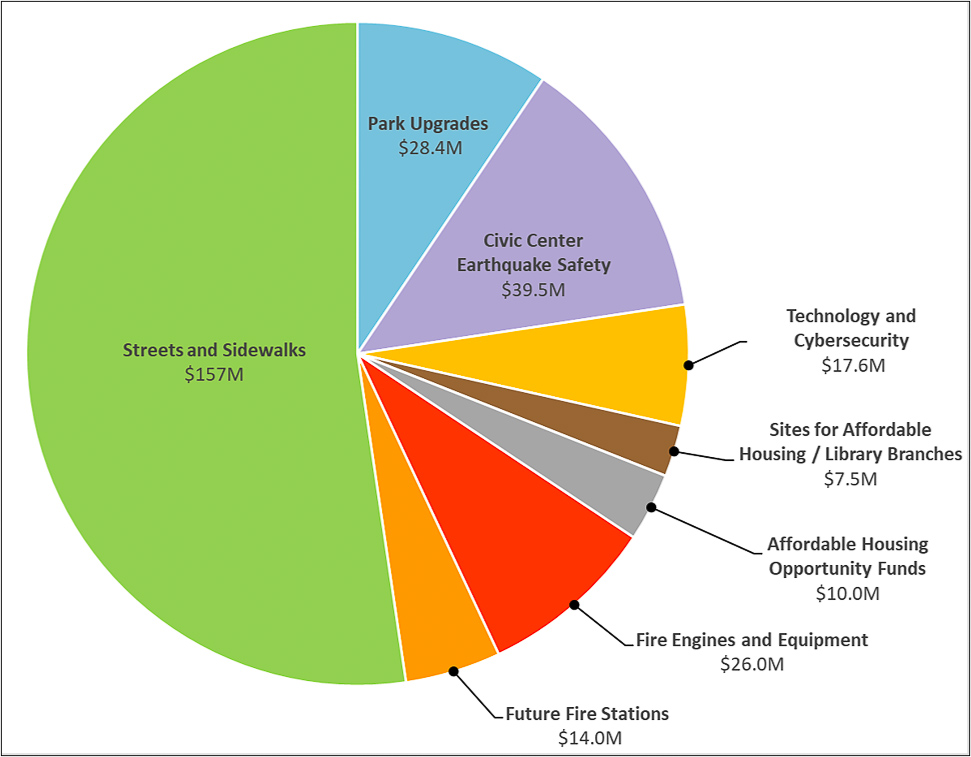 How it affects your taxes?

The bond measure provides up to $300 million over 10 years, while maintaining a consistent tax levy rate of $1.20 per $1,000 of assessed property value.

The bond funded projects would provide for or repair existing infrastructure, reduce funds currently spent on repairs and maintenance of facilities and aging equipment, and provide energy efficiency.