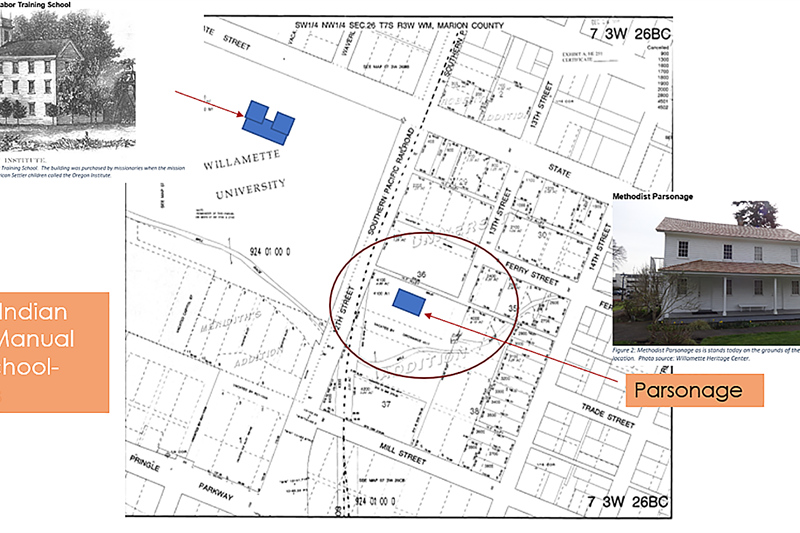 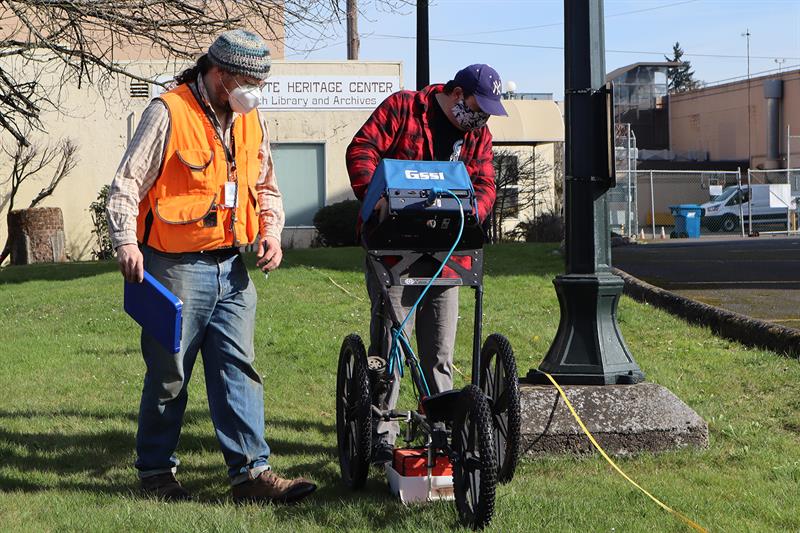 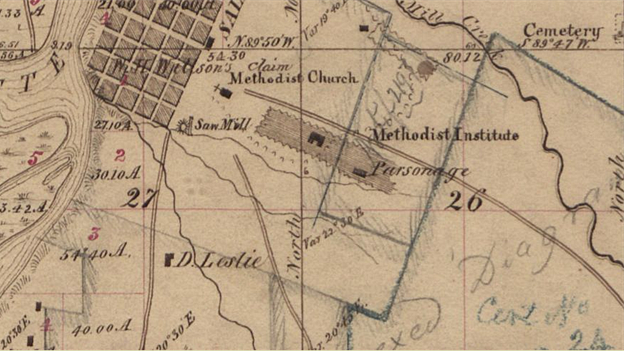 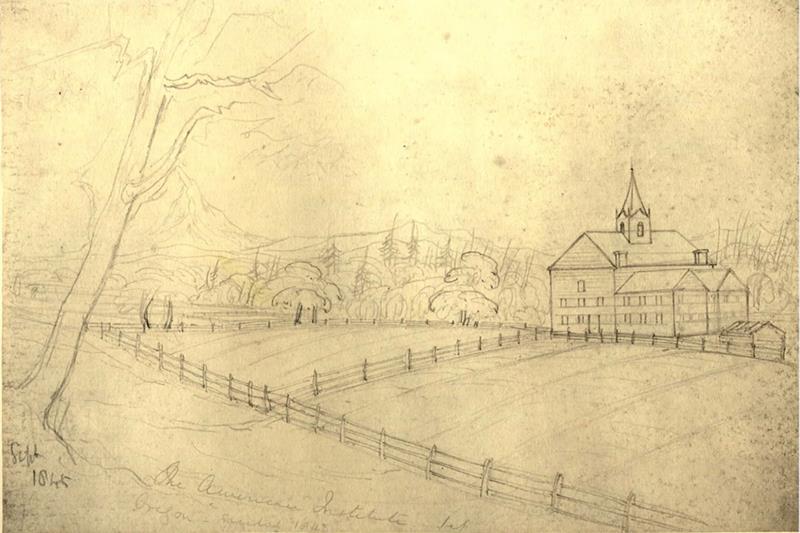 In 1841, missionaries from the Methodist Episcopal Church moved the headquarters of their mission to what is now Salem in the house that was constructed by Jason Lee. Between 1841 and 1842, two additional buildings were erected southeast of the Jason Lee House: a boarding school for Native American children from across the Pacific Northwest, and a home for the school administrators (later known as the parsonage). They were some of the earliest and largest structures in the area, also providing community meeting places and playing a role in the establishment of community structures that continue to the present day.

The boarding school continued for only two years. It was disbanded when the mission closed in 1844. Missionaries and other European-American settlers in the region raised money to buy the building and charter a new school for settlers' children, known as the Oregon Institute. In 1853, the Oregon Legislature granted a charter for Willamette University. The school building served as the campus until Waller Hall was built, between 1864 and 1867. The original school building was destroyed by fire in 1872.

After the boarding school closed, the administration building was retained and converted for use as a parsonage for the new Methodist Church. The building was moved twice before reaching its current location on the grounds of the Willamette Heritage Center.

The research goals of the project are to better understand the location of the two buildings and provide greater context to their original stories. Methodist missionaries were prolific writers and many texts survive recalling their experiences; however, the lives of the Native American children at the school have less presence in historical accounts. It was a multicultural school with students from multiple tribal affiliations. Researchers hope to provide better understanding of students' experiences and lives, and develop better ways to acknowledge their presence in and contributions to our community history.

The two-phase project is already under way.

The first phase of the two-phase project starts with archaeologists and Willamette University students conducting a pedestrian survey, as well as a ground-penetrating radar (GPR) survey. The goal is to identify unusual shapes on the properties beneath existing fill and pavement that may correspond to buildings, structures or other features shown on historic maps or described in historical accounts. The surveys are expected to be complete in March.

The results of the ground-penetrating radar survey will be used to guide placement of archaeological test units that will be excavated to expose and document the nature and condition of the identified anomalies.

The second phase of the project, planned for the month of April, will be subsurface testing and excavation. Work will be supervised by Archaeologist Ross Smith, with field work support provided by volunteers with the Oregon Archaeological Society and students at Willamette University. Greek students visiting Willamette University will complete photogrammetry, which involves converting photographs into digital models.

Artifacts uncovered during the dig will be recorded and processed by Oregon Archaeological Society volunteers in archival-quality materials  for storage and access as part of the Willamette Heritage Center's collections. Cataloging and rehousing will be done by staff and volunteers at the Heritage Center.

Outreach to increase public awareness of the history of the sites is planned to include a public open house at the Willamette Heritage Center during excavation (depending on gathering restrictions and nature of materials found) and a speaker's program with the Archaeological Institute of America, Salem Chapter. The City of Salem, a project partner, will host at least one virtual public archaeology Facebook Live open house during field work, plus additional information on the City website and Historic Landmarks Commission web page.

What is urban archaeology?

The City of Salem does two different types of urban archaeology: academic-centered and development-related. Both types of archaeology practiced within an urban setting are often more challenging than in rural settings because of the asphalt, cars, buildings and people.

Our current project is academic-centered and we are working with our partners (the Willamette Heritage Center, Willamette University and the Confederated Tribes of the Grand Ronde) to further our understanding of the site.

We also do archaeological projects related to development. These projects are known as cultural resource management (CRM) projects and are on a much faster timeline because land redevelopment and construction is involved. Our 2020 Jason Lee archaeological project was a CRM project. We worked with our partners and the developer to complete archaeological testing to ensure that the most significant archaeological resources were avoided during construction. They were able to construct their building successfully, and we were able to learn more about this site, recover artifacts and even document the brick foundation of the 1841 Jason Lee House.

Sometimes avoiding archaeological resources isn't possible. In these situations we work to document and recover as much as we can from the site, as we did with the new Salem Police Facility. We then we work to develop mitigation. Mitigation is typically education about the history of the site.